It’s worth noting that sun did not shine in North Carolina today.

By now you’ve heard that North Carolina’s voters have cast their ballots to amend our state Constitution. Amending a Constitution is no small feat and is not to be taken lightly. North Carolinians voted on Amendment One that stated that the only recognized union is the marriage between a man and a woman and bans all other civil unions, even heterosexual ones. Note that gay marriage is already illegal in North Carolina so this amendment didn’t stand to change anything except to harm families and citizens who fall in its wake as unsuspecting, innocent victims. In my humble opinion, civil rights do not belong in the hands of voters.

Supporters of the amendment have been citing the Bible and its passages massaged to tell only their story. Funny how that happens. America was founded on the premise of religious freedom. Our very forefathers were escaping religious persecution and would surely be devastated to hear of this push for Christian Sharia law here on our soil. I cannot do this topic justice so I defer to my attorney friend who so passionately voices what I am trying to say:

“The Bible is not in the constitution! The constitution specifically states that the government shall not establish a religion. This means that you are permitted to practice your Christianity, and I am permitted to practice my religion without government interference. Having so-called Biblical beliefs enacted into law interferes with my ability to practice my religion and imposes your beliefs on me. There seems to be ongoing misinformation among some Christians that Christianity is under attack and being legislated against. This is utterly false. For instance, I have heard so many times in the fight over school prayer that Christians are not being allowed to pray in school. False. You can pray anywhere you want for anyone you want. What you can’t do is have the school lead the prayer and force my child to pray for your beliefs. You have always had and will always have the ability to marry whomever you like in whatever church you like. If same sex marriage is legal, your church would not have to marry homosexuals (or non-Christians or anyone else). You have and always have had the right to live according to your particular Christian beliefs. But this Amendment forces all of us who do not share your beliefs to live how you think we should and in accordance with your interpretation of the Bible and what God wants us to do. That conflicts with the Constitutional principles our country was founded on–freedom for you AND ME to practice our beliefs without government interference. Amendment One in no way would have hurt your right to pray, marry, practice your particular brand of Christianity, etc., but it does take away rights from those who don’t share in your beliefs and has real world consequences for homosexuals and heterosexuals in domestic relationships.”

FACT: The last time North Carolina amended its constitution on marriage was to ban interracial marriage. In 1875.

I find this history of “marriage meddling” to be fascinating. Where does your state fall? Shamefully, and somewhat expectedly, both my home state and the state where I grew up, North Carolina and Virginia respectively, did not repeal miscegenation laws until 1967…when the Supreme Court deemed these laws unconstitutional based on the Loving vs. Virginia case of the same year. My husband’s home state of Wisconsin never had such laws on their books. Hurray for the Badger state!

With education come experience and exposure. I know this much is true. 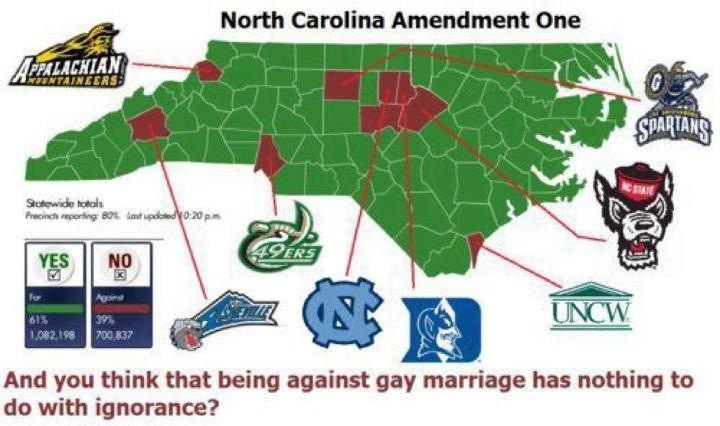 In the end, this vote was not even along party lines, as some might have expected. Some of my most conservative, highly religious Christian friends voted against Amendment One. My Republican friends have been as vocally outraged as I have been. Many of our state’s religious leaders spoke out against the amendment. I also happen to have friends who are so driven by their religious zeal that they cannot wrap their heads, much less their arms, around homosexuality. They voted based on their beliefs, and I cannot fault them. This very right is what our country is based on, right? It is important to note that not all supporters of the amendment can be stereotyped as haters. My friends who supported the amendment are loving, generous people who contribute to their communities. I cannot understand their views on homosexuality and “sin” but I would not classify these generous people as haters. We can respectfully disagree, as maddening as that is for both of us! I fully respect how people pray and worship. But in the end, I cannot stand by while people want to integrate the Bible and its teachings into our government. Beyond that, I have seen some devastating outcomes of intolerance, some too mouth-agape-horrid to conceive.

I have received a flurry of emails, tweets, texts, and what-nots from friends around the country. I thought I would share some of those comments and my own Facebook updates and tweets to give you a taste of what the pulse is among my circle of friends and influencers.
If Amendment One passes tomorrow, North Carolina has no business using the tag line “Goodness grows in NC.”

And just like that, North Carolina, I am so ashamed.

GOP governor candidate Pat McCrory is waxing about our “broken economy & education system.” So help me understand why Amendment One is even an issue.

My condolences, honey. I know you fought it hard.

It really, really sucks. I’ve been DYING to move back, and now? No, thanks. We like living where it’s okay to be yourself.

I’ll tell the decent loving people I know to stay away! I’m so ashamed. I’m in tears right now.

Progressive friends, we need to focus on how the current political climate will affect bullying and hate crimes. It will surely be a justification for those who hate. Let’s start with our schools and neighbors and keep spreading the love. We can raise a more open-minded generation but we need to keep talking about it. The best defense to ignorance is knowledge.

Fellow North Carolinian John Edwards is on trial because of allegations of misuse of campaign money to cover up an affair. Sanctity of marriage indeed.

We haven’t come so far after all. And for those who mention how women had to fight to vote and we can buck up and do this…I say, this is 2012. We should be done fighting for rights of our citizens.

I am so ashamed of the state I call home. Props to everyone who toiled to keep the Bible out of our Constitution and fought fiercely to protect ALL our citizens’ rights.

By the way, North Carolinians who voted for Amendment One, GAY soldiers are out there fighting for you to enjoy religious freedom. Ironic much?

Leave it to NC to make even Virginia look progressive.

Here’s an idea for those people who do not understand the separation of church & state: Let’s stand in line to vote on amending the Bible.

Still love NC. Just have some work to do.

It’s also worth noting that beloved author Maurice Sendak died on May 8, election day in North Carolina. Mr. Sendak was a gay man, and his contributions to our childhoods and our own children is indisputable. By the way, Sendak was in a relationship with his partner for 50 years. To honor him, we must fight back. Let the wild rumpus begin, North Carolina!