Women’s morale was briefly lifted back in 2013, when a passionate state senator inspired women across Texas to march their uteruses down to the capitol building in Austin. Wendy Davis gave women hope that level heads would prevail. But this is Texas, y’all…

Most folks forget there was a time when the state of Texas wasn’t such a punchline, but lately a cowgirl can’t cross the street without stepping on a political cow patty. The tragic story of Sandra Bland is just the latest in an endless cycle of bad news coming out of the Lone Star State.

Lowlights of the past few months include the cop who violently broke up a suspicious swimming ring and that city manager in Austin who hired a trainer to school staff on how to deal with women and their crazy math issues. Speaking of crazy, let’s not forget everyone’s favorite defenders of women’s rights, Ted Cruz and Rick Perry. 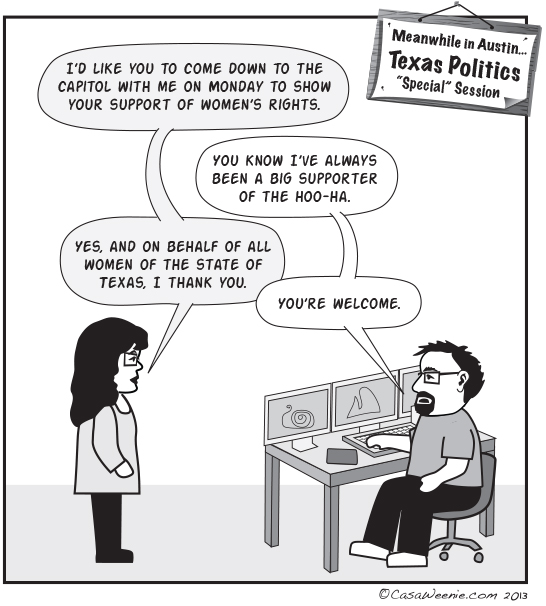 It took no less than the U.S. Supreme Court to put a temporary kibosh on the Texas Court of Appeals’ attempts to uphold a controversial anti-choice law—a law which could close down all but a handful of clinics offering pregnancy termination in a state where the female population hovers around 13.5 million. And those women are spread out over an immense expanse of land. It’s 890 miles from the border with Mexico to the Oklahoma state line. That’s like driving from Manhattan to Nashville, only more depressing.

Women’s morale was briefly lifted back in 2013, when a passionate state senator inspired women across Texas to march their uteruses down to the capitol building in Austin. Wendy Davis gave women hope that level heads would prevail.

But this is Texas, y’all… 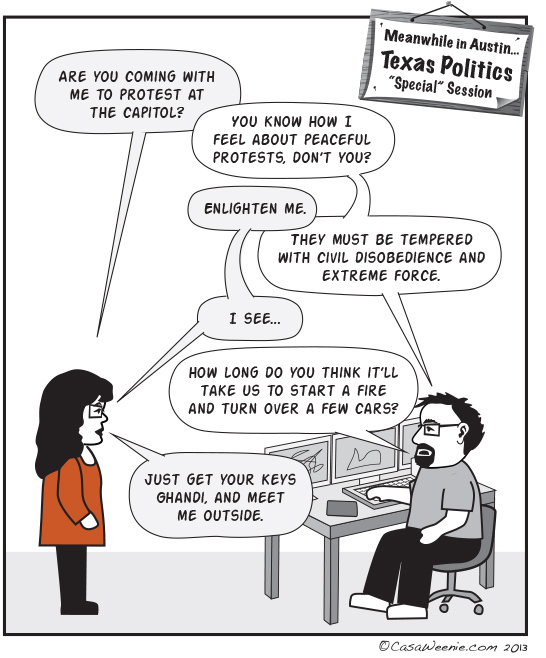 I almost feel sorry for today’s Republicans. There was a time when politically conservative Texans didn’t worry too much about a woman’s private bits, and they certainly had no interest in 18-year-olds carrying loaded weapons to chemistry class. A piece in Rolling Stone may have said it best: “In today’s Texas, which is falling into the hands of gun nuts, border-sealers and talk-radio charlatans, George W. Bush would practically be considered a communist.” 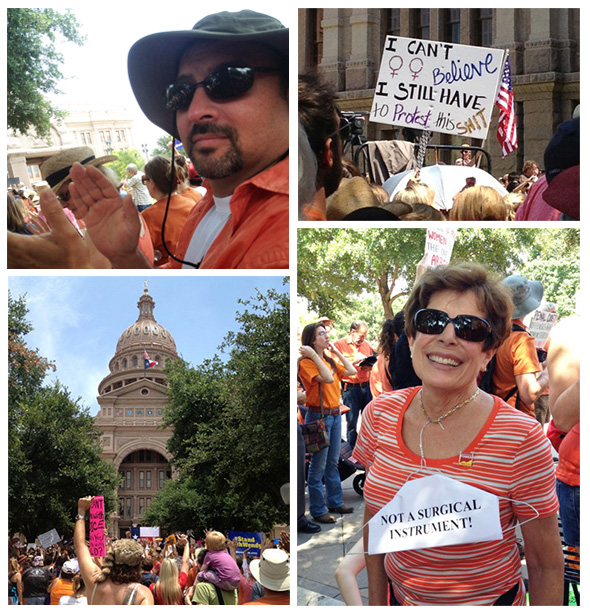 Sometimes we get lucky though—like when another embarrassing Texan accidentally got Governor Ann Richards elected in 1991. Believe it or not, there was a time when liberal Texans weren’t so scarce—that is, until Karl Rove rode into town, effectively killing feminism and disco in one fell swoop. 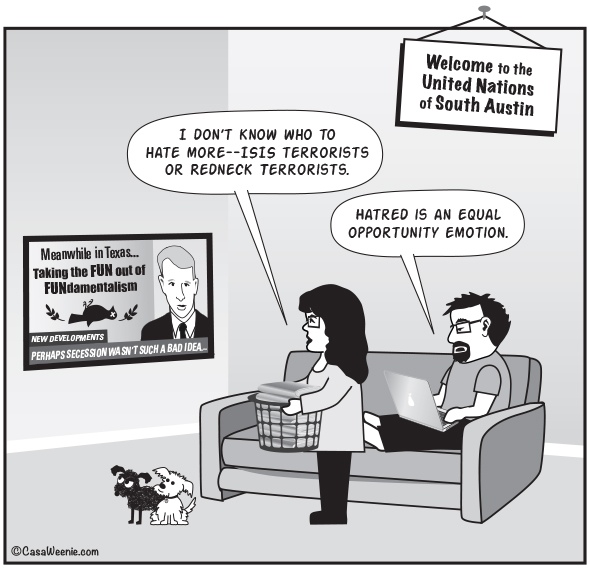 But there is hope. A genial fellow by the name of Donald recently left a Texas-sized dump of hope on our nation’s doorstep—a moving reminder to Texans that we are not alone in this shit show.

To be fair, there are assholes and weirdos everywhere. (As a longtime resident of Austin, I should know.) Surely a state big enough to contain a ranch larger than Rhode Island can accommodate a few rational thinkers. We may have to dig a little deeper to find sanity around here, but Texans are a determined breed, so I wouldn’t give up on us just yet. We’ve struck oil before, so I have to believe we can do it again. I just hope I can say that with a straight face someday.

Ilene Haddad is a graphic designer, blogger and founder of BlogathonATX, for which she received the Anne Durrum Robinson Creative Initiative Award. Her autobiographical webcomic, Casa Weenie, tells the story of what happens when a nice Jewish girl from Baltimore marries an Arab Libertarian from Waco. Because nothing says “comedy gold” quite like an Arab and a Jew trying to fold a fitted sheet together.