From “The Culture Mom”

So, last week, my friend wrote a tribute to Joan Rivers on her blog, and someone called her a “Kike.”

Then a beautiful thing happened.

What beautiful could possibly come of this? Did my friend delete his* hateful remark? No. She left it up for anyone to see. Did friends of hers and strangers alike pile on and let him know what a douche he was? No. Did we recount horrible incidents of anti-semitism in our lives, and in our articulate reasoning and passion, turn him around to see the error of his ways? No.

The beautiful thing is this: everyone ignored him. (His comment is on the bottom, and the others above it followed.) 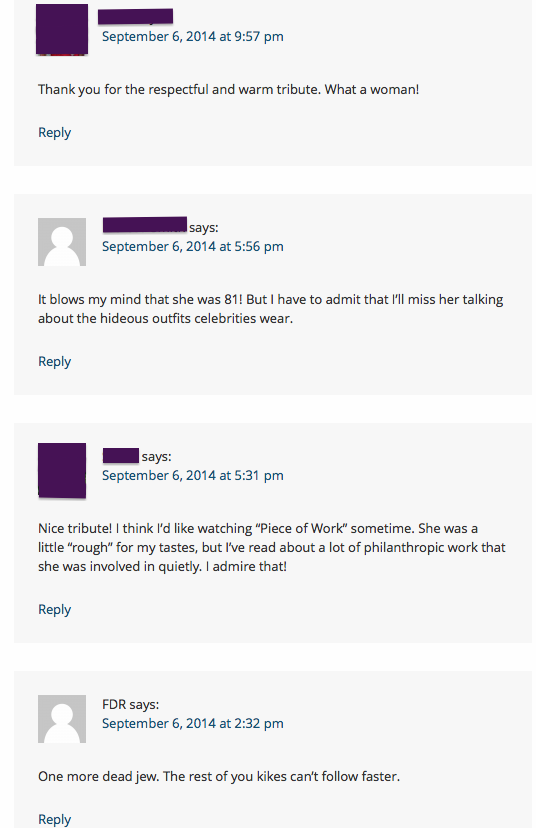 About 9 comments and hours later, a friend made a passing and fittingly dismissive reference to his vile remark, 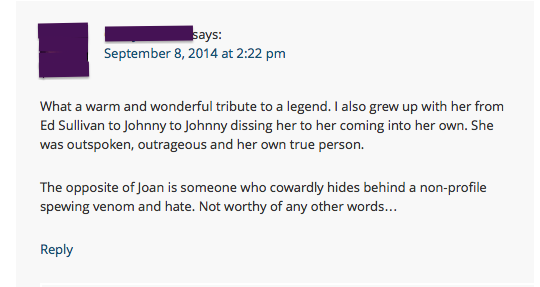 … but other than that, the horrible comment was ignored. I find that beautiful.

Is relegating comments like this to obscurity the way to go? Is ignoring outrageous anti-semitism (or racism, homophobia, misogyny) the way to progress? Will that lessen the impact of such things and the power they have over us? Maybe in the world of internet comments, the answer is yes. It sure felt like that in this case.

Now what about in the world of politics? 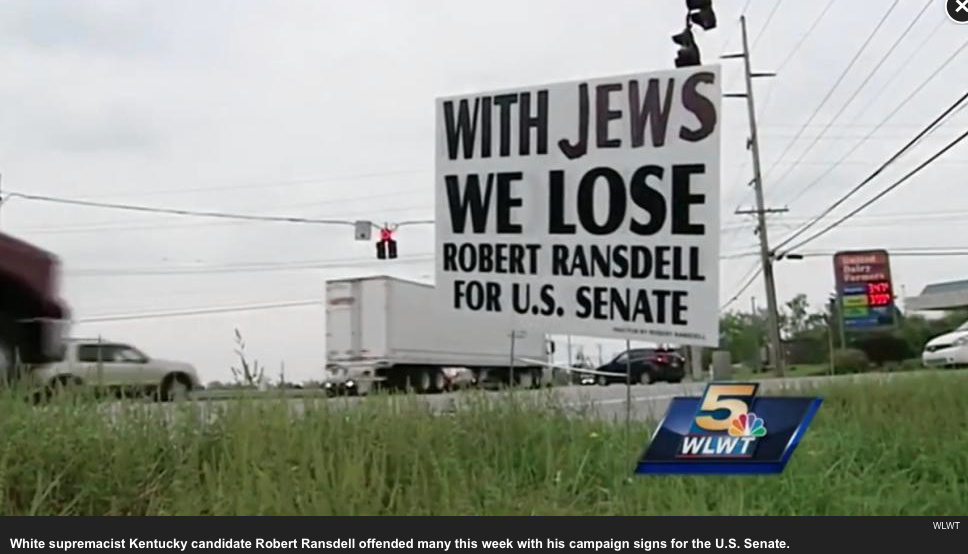 Photo courtesy of The Daily News

This heartwarming message comes from a zero-shot candidate for the U.S. Senate. Here, people were more vocal in their disgust for this neo-Nazi – visibly upset and saying so. Yet, even he knows he doesn’t exactly have a chance at winning. Is this another instance of “Ignore him – not worth it?” Personally, I think it is. Take his signs down, sure – they’re illegal anyhow, since they don’t have an address printed on them, and it looks as if he is also not getting the property owners’ permission before posting them. Then, yes – relegate him to the obscurity he deserves. Don’t let this inconsequential bully/idiot have the satisfaction of upsetting you.

At what point, then, do we register concern? At what point does silence and dismissal of such things become counterproductive, or worse, a danger? After all – in the last few years (and especially this past summer) in Europe it has become cool to hate the Jews again. Deborah Lipstadt, a noted Jewish scholar, broke it down in the New York Times back in August. Normally a woman who speaks out against blithe and irresponsible comparisons to the Holocaust, she outlines how while it is still different now, things are developing in a way to merit much closer scrutiny and caution. “This is not another Holocaust, but it’s bad enough,” says Professor Lipstadt. I wish I had a formula to which I could refer. “If this happens, then I worry.” “If that happens, then I speak up.”

I am someone who, when confronted with anti-semitism in my own life, reacts with physical symptoms. My heart pounds, my stomach tightens, it is the ONLY time in my life I ever feel my face flush with heat, and I feel the visceral fight or flight response. So, I don’t know why – I don’t understand – why these two things (the blog comment and the Senate candidate) don’t illicit that response from me. I’m not one to dismiss such things lightly.

I hope it’s a measure of my feeling secure because these people are outliers. Fringe. Regarded as absurd and caricature-like in their rants by almost anyone who sees them. I hope they stay on the outer edges, or better yet, disappear. They won’t, though. They don’t. So, while these two particular instances don’t worry me, they raise my threshold of awareness. Whether I want to be or not, I am paying closer attention. In the meantime, though, it felt really good to give the anti-semitic troll the silent treatment he deserved. We are stronger and more powerful when we don’t take the bait. As long as “bait” is all it is.

* I realize, of course, the commenter may be male OR female. I use the masculine here to simplify the writing and to differentiate between the commenter and my friend, who is female.

Aliza Worthington grew up in Brooklyn, NY, and now lives in Baltimore. She began writing in 2009 at the age of 40. Sometimes her writing follows The Seinfeld Model of “no learning, no hugging.” Other times it involves lots of both. She blogs about Life, Liberty and Happiness at “The Worthington Post.” Her work also appears in Catonsville Patch, Kveller, and has been featured in the Community Spotlight section of Daily Kos under the username “Horque.” Her writing has also landed in the “Winner’s Circle” on Midlife Collage twice. Follow her on Twitter at @AlizaWrites.